This week's extract relates to the 1974 County Junior Hurling Final and was printed on the 30th November, 1974.

Early comers to Dungarvan's Fraher Field on Sunday last were well rewarded when Stradbally and Mount Sion hurlers served up a thrilling hour's play in the county junior(hurling) final.

Stradbally had first use of the near gale-force breeze and an early goal from a seventy by Robin Aherne sent their hopes soaring.  Sean Aherne and Tom Hearne added points and Paddy Meehan pulled one back for "Sion" who were making Stradbally fight hard for every puck of the ball and even against the breeze the Stradbally defence saw plenty of the ball.  Richie Dunford clipped over a point and Frankie Walsh pointed a 21 yard free for mount, before Tom Hearne completed the first half scoring with three points, two from frees to leave the score at 1-6 to 0-2 at half time.  The big question now was, could Stradbally hold out against the breeze, and in our discussion group at half time, I was alone in my view that Stradbally would win."

The first half had been exciting, in truth it was not a patch on the second.  From the throw-in Mount Sion swung into action and veteran Frankie Walsh swung over a point and again we had flashed of Frankie's old magic when he pointed two frees.  Jim o'Connor and Tommy Sommers added points from play and again it was Frankie Walsh who was on target when he pointed a free in the 40th minute to leave the score 1-7 to 0-8 in Stradbally's favour.  Mattie Reilly had scored for Stradbally in the third quarter.  Mount Sion had played really grand hurling in keeping with the tradition of their famous club.

Every Stradbally player was a hero on Sunday evening as, above all, this was a team effort in which every player displayed wonderful spirit and no mean hurling skill.  With Robin Aherne, Pat Power, Sean Aherne, Richie Dunford and Tom Hearne starring, goalkeeper, Bill Dunford kept his net intact in fine style, fronted by a resolute full line in which Pat Fennell, Joe Power and Tom Hickey battled gamely.  Liam Carroll also worked hard in defence and up front Mattie Reilly and Tom Cunningham were seen to good effect and both Joe Curran and Tom Halpin, who were recalled for this decider, showed that they have lost none of their old dash.  While Ollie Carroll and substitue Alo Curran also contributed their share.

Referee  Jimmy O'Gorman (Tourin), who was officially at his first ever county final, came through the test with flying colours."

This article relates to the 1974 Under-21 County Final between Stradbally and Tramore which appeared in the media on Saturday the 9th December 1974.

On Sunday last, Stradbally footballers captured the U-21 title when they defeated Tramore.  This game will be remembered for the high standard of football and good sportsmanship from both teams.  Tramore, as was expected of them, made a great effort to hold on to their title, but in the end they had to bend their knees to the gallant "Reds".

Tramore won the toss and elected to play against a strong wind.  A point from Liam Clancy opened the scoring and after this Stradbally piled on the pressure and further points by T. Weldon, Pat Butler and Colm Barnes left the "Reds" in front at halftime.  The score was seven points to nil.

Tramore started like a house on fire and pressed for those early scores, but try as they should, they come up against a defence that was like the Rock of Cashel.  But it was not until the last fifteen minutes that Tramore started getting those scores, but points by Tony Partridge and a goal from a penalty by John Purcell converted in the 55th minute and, within a minute, Tramore were level with a fine point from Milo Walsh.  Just when it seemed that Stradbally were losing their grip, how they reacted with the encouragement from the crowd; and Pat Butler became Stradbally's hero when he pointed that all important point in the very last minute and Stradbally are the U-21 football champions of Waterford for 1974."

Back to Roll of Honour 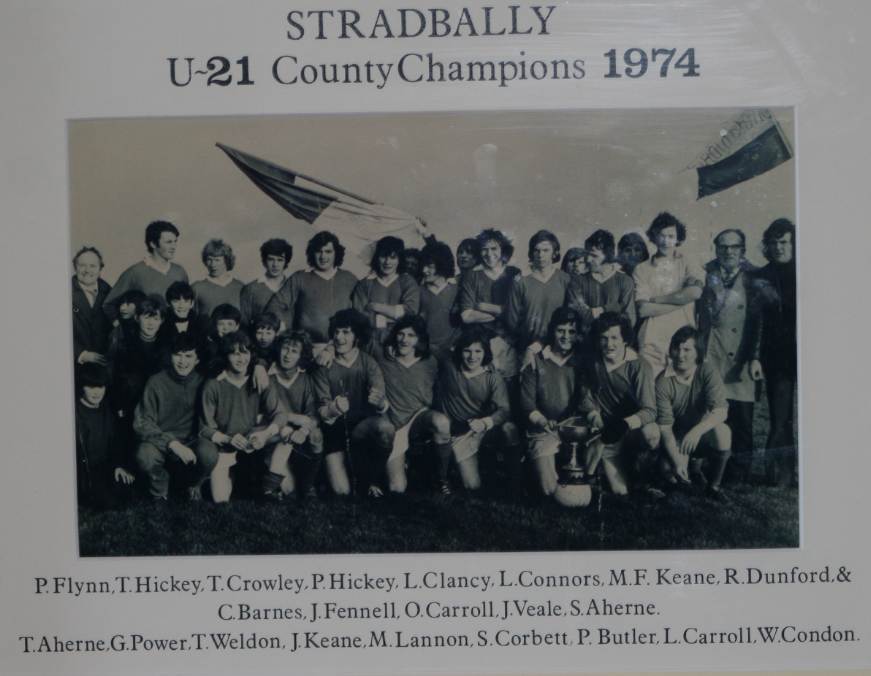